"Pugs" have a bad reputation as a fat and lazy breed and many people think that we can only jump on the sofa... It's about time the world see pugs as a healthy and active breed of dogs...
Our agility titles: Balearic champion 2010, 2011, 2012 and 2013. National champion in 2011 and 2012, finished second due to injury in 2013. Represented Spain at the World Agility Open in 2011, 2012 where we make the penthalon finales each year and in 2014 we were picked as a wild card and once again made the finales of the penthalon 14th overall and biathlon 23rd, I'm so proud of my Pancho for all his hard work....Yes a Pug at the World championships!!! In 2013 we also represented España at EO in Belgium and won 4 rosettes at the International Agility Festival in grade 6 with a 4th, 8th and 9th place and 1st place at the IFCS qualifier at Oxford. Top 3 on every class at the Jersey Agility festival and made the small final. Pepito and Wilson have won titles too at trials like the Fab Show in Oxford UK in 2013 and team events with Pancho and many podiums at the Jersay agility festival too. I'm so proud of my babies, I really can't ask for more. OUR MOTO "PUGS RULE

YOU CAN FOLLOW USE ON OUR WEB SITE WWW.THEFLYINGPUGS.COM

Pugs walk about in Mallorca

Last week we went for a nice walk in the country with our mama and papa. We had a great time and it wasn't too hot... 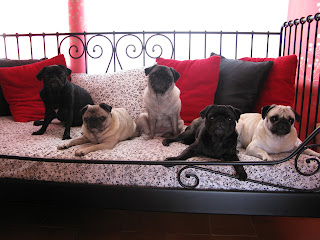 This weekend we ran a course that was very enjoyable where you will find a few difficultes from wraps, front crosses and rear crosses.

We also worked on our contacts to show you that running contact are a good option for small dogs and this will allow the dog to keep running without losing speed. 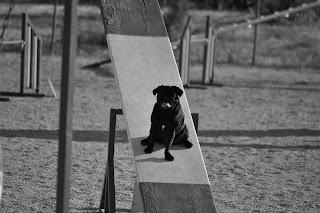 This weekend we went to the "centro canino Son Gual" for a competition for the Balearic league 2012. We haven't raced since our trip to the UK and we had time to work on the "sit stay" because that was a big problem over there.
On saturday we had a beautiful clear agility round and a clear but a little messy jumping. Pancho won overall and I was so proud of my baby. 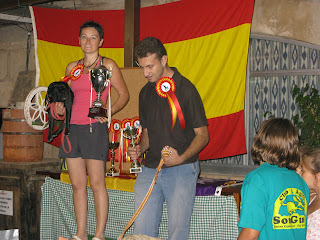 On sunday we had 2 eliminations BUT I was glad because we learned something new!!! I tried to handle a "SCOOP". This is when the handler is recalling the dog over a jump and almost passes the dog across himself from one hand to the other so he can shape the dog's corner on the way to the next jump, the handler needs to stand at the exact point where he wants the dog to corner. (From Dawn Weaver's book: Knowledge equals speed!)
Like is said "WE TRIED" but didn't make it the first time round because I wasn't at the exact point.. so we tried again and did it!!! The second elimination was my fault, I had nothing left in my legs and couldn't run anymore :(
Our baby Wilson entered his first infantil competition and he did great. At 16 months, we had to wait for his body to reach adulthood because of his displacia. The specialist is happy with the work we have been doing to get his hip and thigh muscles as strong as possible to allow him to jump without problems... 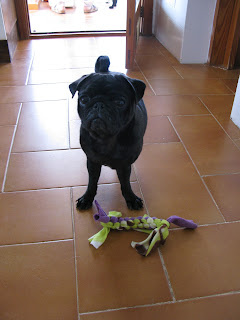 I'm so proud of him and I can already see a champion like his half brother Pancho :)

We have 2 courses this week, one for avdanced dogs and the other for lower grade dogs. First we have Pancho and you will see that at jump 2 to 3 we had the possibility to handle those two jumps 2 ways, so we tried them both for you. You will also see the very good weave entrance from Pancho.

Then we had Pepito run the easier course for you, no options there just run as fast as you can really and he did great.

Both Pancho and Pepito weren't that fast as it was hot that evening around 27 degres...
Video of both courses, enjoy :)

The flying pugs and caniche 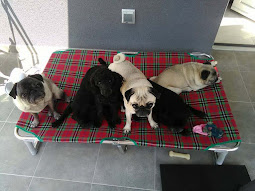 Gordon is my first pug, I got him in 2003 at 10 weeks old from one of the best pug breeder in the UK, Amanda Ellis in Wimbledon. I fell in love the second I saw him and I knew he was happy with me when he fell asleep in my arms. Gordon is my little Boudha, he is a very zen and relax dog, "peace and love" is his way of life. He likes his long walks and at 11 years old, I'm glad to say that he is still very active and plays a lot with Wilson the baby pug of the family. 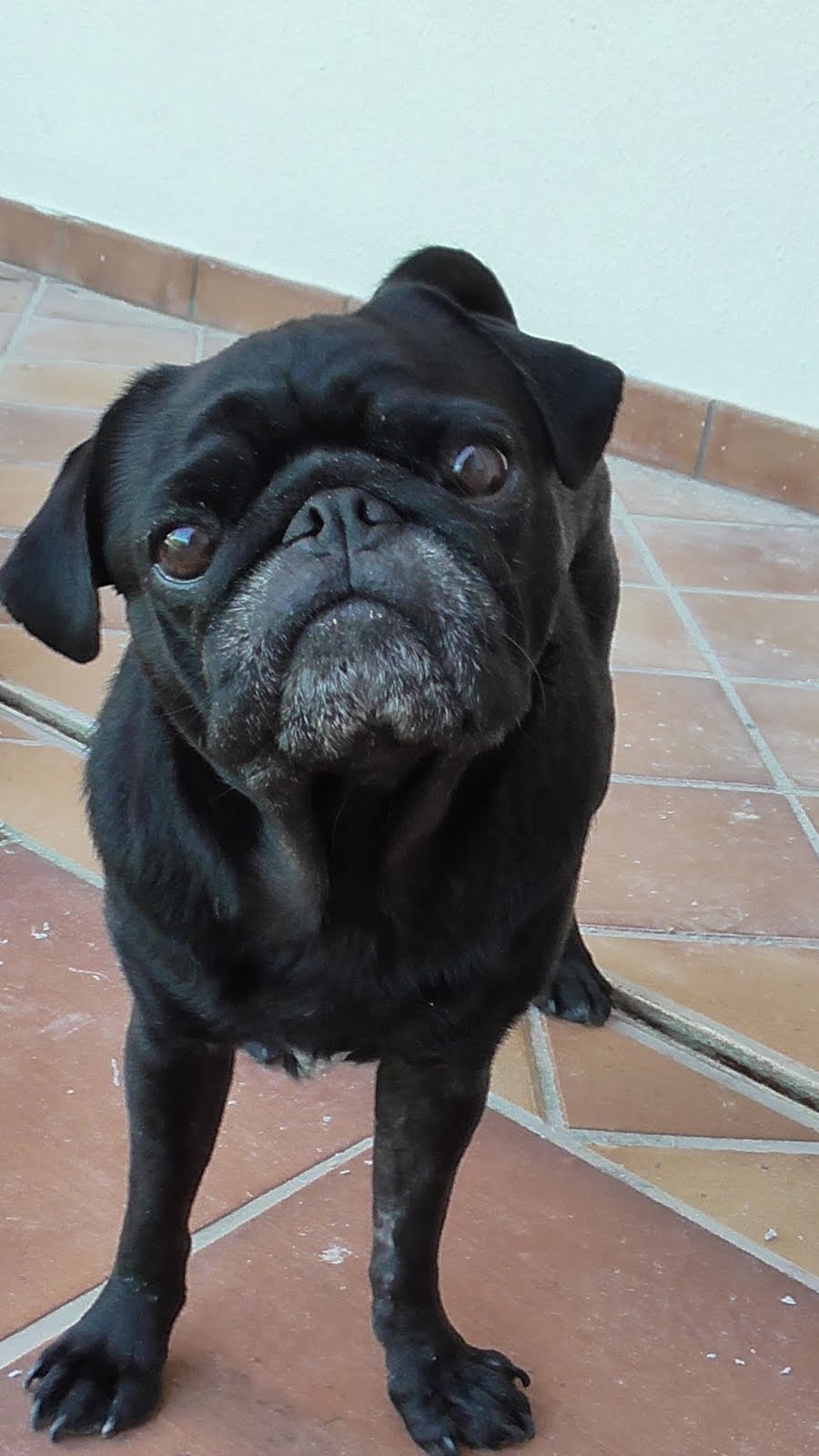 Pancho is my black champion. I got him at 7 weeks old from our breeder here in Palma in 2008. I didn't want a black pug but my partner wanted to see him and as soon as he got on the floor he came to me and fell asleep on my lap... Ok he got me!!! I couldn't say no and it was the best thing I did. At the age of 7 months old I started agility after reading in Cesar Millan's book that it can help with "very active" dogs. So we went and the minute he entered the ring he started to jump everything in front of him, climbing the contacts jumps and entering the tunnels all on his own... Now nearly 5 years old, he has won many competitions, 4 Baleares championships in the row, and with Pepito's help finished 3rd at the Balearic championships in at the team event in 2013. In 2010 Pancho finished 3rd team at the Spanish championship and our big moments of 2011 and 2012 was the World agility open "WAO " when we represented España and both year made the pentathlon final. This Year we went to WAO as a Wild card and again made the pentathlon final and finished 14th over 80 dogs. Pancho also won the national and Balearic championship mini/midi 3 years in a raw. In june 2013 we went to England to compete at the International Agility Festival and won 4 rosettes and this year we made the International final and again won many rosettes!! I'm so proud of my "Panpan".

Frimousse is my princess, she is from Essex in the UK and is a real tart... She is the boss and has a temper like her mama I guess, don't mess with her... She is not the active type but does the odd agility training and competes with the babies due to an accident to her eye 2 years ago. She has lost 80% of her sight of her left eye and since that accident she likes her nice and slow walkes and running after Pancho (she is in love with him but don't tell her I said that.) She is papa's girl and when Pancho and Pepito were babies she did a great job playing mom with them. 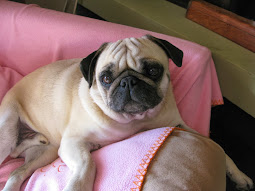 Pepito is my little pug, at just 6,8kg he is a small pug. I got him 5 years ago with Pancho and it was like having twins.... Double trouble with them 2.... We started agility and everything Pancho was jumping he was jumping, it was so funny... He is my little agility champion but not his prefered excercise, he loves running, swimming and playing with his toys. This year Pepito came 2nd behind Pancho at the Baleares championships in 2011, in 2013 with Pancho's help finished 3rd team at the Balearic Championships and 4th at the national championships in Madrid. I'm so proud of my little Pepito. I can look into his eyes all day, if he was human he would have all the girls running after him.

Wilson is my new black baby, he's 3 years old and pancho's half brother. Since getting Pancho I'm hooked on black pugs. Poor Wilson didn't have the best childhood with 2 eye perforations at 4 and 6 months old due to a bacteria, we are not to sure how it happened, but he had to have an operation on each eye and we discoved that his glands lagrinales didn't do their job. His is now 100% just needs his daily eye drops. A few days ago i had him checked by a bone specialist because i wasn't happy with the "click" coming from his hip bone when playing. My fears were real as he was diagnosed with hip dysplacia. Poor sausage he now has to be on a special diet and have specific excercise training to make sure his back legs are stronge. He won a trial at the Fba show UK this summer and has a great future in front of him. He is my little "baby" and loved by all the other pugs. Wilson has started to compete in FCI and h's doing great. 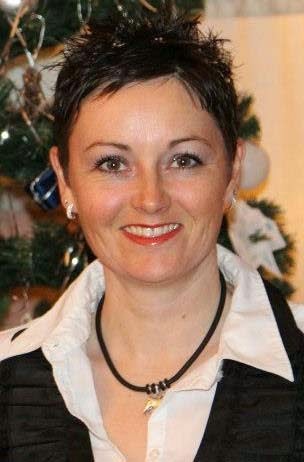 Our mama is called LAURE, she was born in Le Mans france in 1974 (she's old but don't tell her that!!). She has always had a great contact with animals as a young girl with her gran's dogs and her own. At 7 years old, she started at a poney club and from day one was right at home with poneys and horses. At the age of 15, she received her first and only horse called "MUST". Laure and "Must" had the perfect relationship and went to win many horses trials and participated at 2 Switzerland junior championships in her specialty "cross country". When "Must" had to retire due to emphysema in 1994, she moved to Brighton in the UK to learn English. England was a nice place to live and she stayed... In 2000 she started training and competiting in triathlon and many road races. Within 2 years she was in the Great Britain long distance triathlon team and participated at 3 world championships in her age group. In 2005 she entered an Ironman in Austria and finished it in 12h53, which was one of the best sport achievement. That same year she also moved to Majorca Spain for a warmer way of life and in 2009 started agility with Pancho and Pepito at our agility club Mitjanit. We know that we are novices in agility and have a lot to learn still but we are doing out best to show sportmanship and enjoy every minute of our journey into that sport.

Dog agility is a dog sport in which a handler directs his dog through an obstacle course in a race for both time and accuracy. Dogs run off leash with no food or toys as incentives, and the handler can touch neither dog nor obstacle. Consequently the handler's controls are limited to voice, movement, and various body signals, requiring exceptional training of the animal and coordination of the handler.

In its simplest form, an agility course consists of a set of standard obstacles laid out by a judge in a design of his or her own choosing in an area of a specified size. The surface may be of grass, dirt, or rubber. Depending on the type of competition, the obstacles may be marked with numbers indicating the order in which they must be completed.

Courses are complicated enough that a dog could not complete them correctly without human direction. In competition, the handler must assess the course, decide on handling strategies, and direct the dog through the course, with precision and speed equally important. Many strategies exist to compensate for the inherent difference in human and dog speeds and the strengths and weaknesses of the various dogs and handlers.

We are The flying pugs

My champions 3rd team at the Balearic championships 2013

A quick dip in the pool

Pancho and his tooth

Pugs by the beach

Our mama and us